Harry Potter and the prisoner of Azkaban (DVD)
(Video) 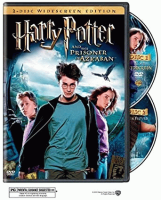